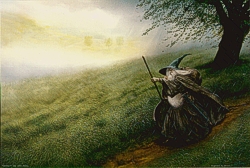 In 1984 Bjørn Ole wrote the music for thetheatreplay "The Hobbit". This was also a production together with
The Ballet of Kristiansand. At the time the music was recorded at Cross Studio with engineer Alf Emil Eik who
also played bass and guitar. Spring 2001 BO was approched by some friends about releasing the music. Since then
he has remastered the original tapes and composed some additional material. The project will hopefully be
released in late 2002. In the mean time you can listen to some of the demos here.

The Story Of Smaug